Your browser is no longer supported

To get the best experience, we suggest using a newer version of Internet Explorer/Edge, or using another supported browser such as Google Chrome. 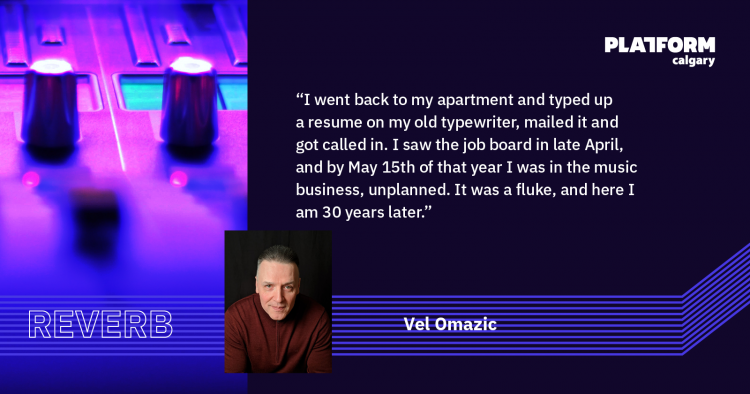 Mentoring and collaboration are key to success as a startup. This fall’s cohort of Reverb received invaluable guidance from Advisors — an esteemed group of entrepreneurs and musicians from across Canada who are generously offering to share their wisdom. This week, we’re featuring Vel Omazic!

Vel Omazic is the Co-Founder and Executive Director of Canada’s Music Incubator (CMI), a national not-for-profit organization specializing in professional development, ongoing mentorship and live events for artists, managers, and music companies. Since its inception in 2012, CMI has supported 1,000+ emerging music entrepreneurs, of all genres, in the development of long-term careers and sustainable businesses.

Vel was always a fan of music, though pursuing it as a career wasn’t something he anticipated or even thought possible. He studied Journalism at Carleton University after identifying a knack for words and writing, and got started with music after seeing a poster for a job with PolyGram Records during exam week — the job involved writing artist bios, press releases and newsletters and sounded exciting.

“I went back to my apartment and typed up a resume on my old typewriter, mailed it and got called in. I saw the job board in late April, and by May 15th of that year I was in the music business, unplanned. It was a fluke, and here I am 30 years later.”

After his first gig in the National Promotion and Publicity department with Polygram Records, Vel spent ten years at Sony Music Canada where he served as Vice-President of National Promotion and Media Relations. Before launching CMI, he spent a few years as VP of Marketing and Communications at Green Living Enterprises, an environmental consulting, marketing and events agency before ultimately returning to music.

CMI was created after Vel saw how the shifts in the music industry caused by digital disruption were impacting artists.

“When Napster appeared in the industry in 1999, that changed everything. I was at Sony Music at the time and our business changed overnight.”

While in the past, artists had to be signed by a record company, things were changing and everyone now had the technology to create and distribute their own music. As a result, a lot of artists were missing out on the mentorship that a record label would provide.

“The challenge that we saw was there were all these artists, maybe even more coming along, and they didn't know what to do. They still needed some guidance, some help, and that was the whole impetus of CMI.”

Vel’s involvement in Reverb was a natural extension of what he’s already been doing.

“I’ve been mentoring, coaching and supporting music tech startups and next generation music companies for the last four, five years. I don’t have a tech background, but business is business. It’s been a great experience.”

Vel’s music documentary recommendations: Tom Petty and the Heartbreakers: Runnin’ Down a Dream , The Bee Gees: How Can You Mend a Broken Heart & Tina